One of the things that Winter holiday means to me is movies, and good ones at that. It is something my wife and I love to do, enjoy and argue about. My son noted that we
are different than other families in that we see good movies and his friends see crap all the time. To sort of normalize things I’ll say that I really enjoy movies with an edge generally favoring movies with a bit of noir in their soul. A recent example of such would be “Drive” from 2011, going a bit further back some of my favorite films are “Pulp Fiction” “Fight Club” “American History X” and ”Full Metal Jacket”. I also love some of the more majestic movies of days gone by such as “Lawrence of Arabia” and “2001: A Space Odyssey” in particular.

Here are my holiday movie observations for the current season. I’ll assign each a letter grade with an Academy award winning film usually getting an “A”. I’d give all of the above-mentioned movies this grade and a few “A+”.

I’ll note that some of the quotes below contain some very bad language, which you would hear in the theatre. Be forewarned.

An absolute stunner of a movie with one of the best acting performances I can remember seeing in a long time by JK Simmons as Terence Fletcher. It is a student-teacher story set in a conservatory. The kid is a young talented jazz drummer (played with skill by Miles Teller) looking to catch the eye of the famous teacher. He does and then the fireworks start. The filming and acting produces the sort of tension that usually come from action flicks. This is literally edge-of-your-seat stuff,
the tension arising from the interplay between the teacher and student is incredible.

Terence Fletcher: There are no two words in the English language more harmful than good job. 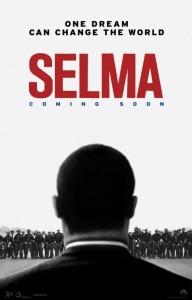 I really wanted to like this better. It was a finely acted and crafted historical drama based on a key moment in the civil rights movement. It is stunning to see the kind of things that used to happen in the United States. We’ve made progress as a country, but shockingly little as the events of the last year show. There is action in the deeply racist Alabama of 1964 and 1965, and tension between MLK and LBJ. Other figures like J. Edgar Hoover and George Wallace come across like the villainous humans they were. Overall an important movie that was competently executed, but not the brilliant movie I had hoped it would be.

“People out there actually say they’re gonna kill our children, they’re trying to get into your head.” – Coretta Scott King 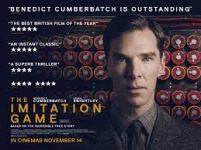 This is a good movie, the worst of the ones I gave an “A-“ to. It is a very Hollywood version of Alan Turing’s life. Benedict Cumberbatch takes the material and produces a wonderful performance. The storytelling is unique running three timelines in parallel from Turing’s life with great lessons relevant to today’s problems. The upshot is that Turing’s life was immensely tragic, and his service to England and the World was never paid what it was due.

Joan Clarke: Sometimes it is the people who no one imagines anything of who do the things that no one can imagine.

I would sum this movie up as being thoroughly disappointing. I am guessing that the problem is that no one can tell Peter Jackson “no” any more and he is reverting to his roots. Some of the film making decisions are simply ludicrious and remind me strong of Jackson’s earlier films like “Dead Alive”. The choices almost always comical and some one should have told him, “this is a bad idea”.

Bilbo Baggins: One day I’ll remember. Remember everything that happened: the good, the bad, those who survived… and those that did not.

I didn’t actually see it, my wife and daughter did while my son and I saw the Hobbit. She said it was great (she got the good end the deal to be sure).

Along with Whiplash this is my choice for the best picture of the year. The movie has a massive gimmick being filmed a bit over time a week or two a year for 12 years. It chronicles the childhood of a boy whose parent divorce and how he develops from a small boy entering school to an adult entering college. The gimmick the film uses is remarkable using the same actors to show the passage of time. The film is wonderful beyond the gimmick and delivers a wonderful tale of personal growth for all the characters. It is both simple and immensely rich.

Nicole: You know how everyone’s always saying seize the moment? I don’t know, I’m kind of thinking it’s the other way around, you know, like the moment seizes us. 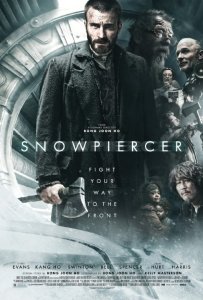 This movie is a wonderful bit of pay-for-view surprise and quite enjoyable on the whole. Some aspects of the movie are odd, but it is filled with great performances including surprising depth from Chris Evans. He is a much better actor than people realize. The movie has action, tension and deep commentary on our modern world and its problems. The film requires a degree of suspecnsion of disbelief regarding the basic premise, but if you can manage that it is a real gem.

Curtis: You know what I hate about myself? I know what people taste like. I know babies taste the best.

This was a marvelously dark movie and portrait of a true sociopath. Jack Gylennhaal is wonderfully creapy in the roll and manages to make himself genuinely unlikable. He is driven and relentless in achieving fame and success without a hint of morality. At the same time the film succeeds in providing a tremendously insightful commentary on our modern society and our appetite for news that titillates much more than informs.

Lou Bloom: That’s my job, that’s what I do, I’d like to think if you’re seeing me you’re having the worst day of your life. 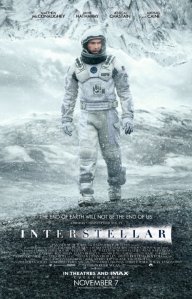 This is a film that divides opinions for good reasons. It is a wonderfully majestic movie that is horribly flawed. Good, but not great performances can be found working on a script that was uninspired. The concept and arc of time with an innovative narrative concept make the story watchable. In the end it produces a watchable film that won’t be remembered 10 years from now.

I never ask for the science parts of movies to be too realistic simply not too cartoonish. It succeeds in being realistic enough not to offend. I tend to believe that we don’t understand the universe well enough to know what isn’t possible. It offers a Hollywood friendly version of relatively forward looking science. Having Habitable planets in the vicinity of a black hole is not the most realistic thing. I would have been much happier with a wormhole alone leaving the black hole out.

Cooper: We’ve always defined ourselves by the ability to overcome the impossible. And we count these moments. These moments when we dare to aim higher, to break barriers, to reach for the stars, to make the unknown known. 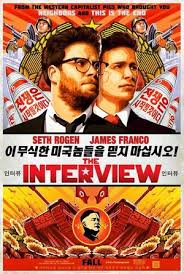 This film is the controversy of the season with the hacking of Sony and the capitalization to terrorism initially declining to release the movie then coming to their senses. We saw it on pay for view. The hackers did a better job sponsoring the movie than it deserved. This was easily the worst movie we saw all season. It was amusing and thoughtlessly entertaining, but a cinematic turd. It was a couple hours of my life I can’t get back.

Kim Jong-un: It was a gift to my grandfather from Stalin 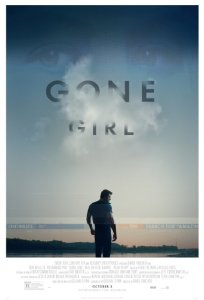 This was an absolute gem of a movie. We loved it. It was thrilling, dark and relentless. It was a wonderfully grim look into a romance and marriage with an edge. So much is happening out of view and hidden from the viewer adding to the tension in theatre. Rosamund Pike is simply wonderful and creates a character of great depth who ultimately generates a deep emotional response. It is never clear who is the biggest villain. It is one movie where no one is a hero.

Amy Dunne: I’m the cunt you married. The only time you liked yourself was when you were trying to be someone this cunt might like. I’m not a quitter, I’m that cunt. I killed for you; who else can say that? You think you’d be happy with a nice Midwestern girl? No way, baby! I’m it.

Nick Dunne: Fuck. You’re delusional. I mean, you’re insane, why would you even want this? Yes, I loved you and then all we did was resent each other, try to control each other. We caused each other pain.

Here are the movies that I haven’t seen yet, but want to see (A Most Violent Year, Birdman, Theory of everything, American Sniper, CitizenFour, Foxcatcher).